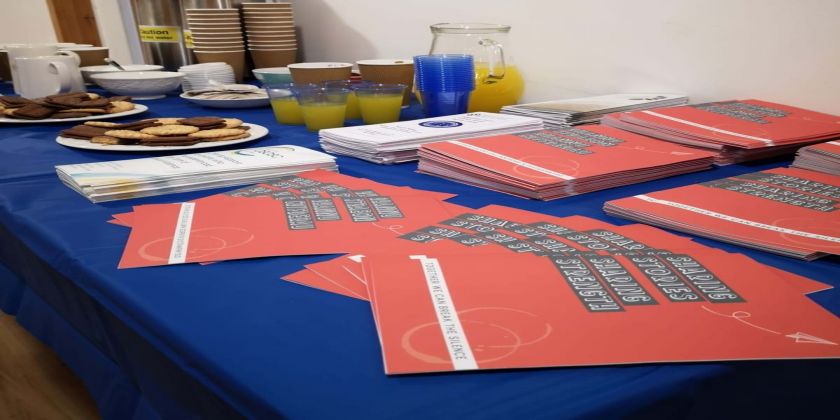 In their own words, the 20 young women and men have written about finding the courage to speak out, coming to the SARC, talking to the police, going through the court process, the support they have received and how they have coped.

The resource booklet was mooted 18 months ago by those who attended the SARC having been subjected to sexual violence, now the completed version was officially launched with the film and podcast on September 5th at TAPE in Old Colwyn

Hannah Mart, Children and Young Peoples Advisor (CYPSVA) said: “The whole process can be traumatising from the initial disclosure through to talking to the police and going to court and we saw how the young people we supported could be role models for others; sharing their journey, informing, advising and helping each other to survive sexual violence.

“These are the stories you don’t often hear, yet often people feel the same. It’s 100% their words about expressing the feelings and making it known that sexual violence is survivable.”

The booklet, which has been funded by PACT the Soroptimists and the High Sheriffs Crimebeat fund, as well as various sponsored events organised by the young people, includes contact details for all the support networks including North Wales Police and ChildLine and is accessible for everyone.

Hannah, who facilitated the booklet added: “It has been a privilege to work with these inspiring young people – to share first hand experiences with people who are so resilient, brave and prepared to want to make things better for other people.”

In addition, to supporting the recovery of young survivors by giving them a positive platform and an opportunity to re-frame their trauma, increase their resilience and reduce isolation, it will be used to help professionals understand the experience of the journey from the perspective of the survivor and better support them.

It has been stated: “The past cannot be changed or reinvented but through story telling we might shift the place the past takes in our present lives.”

The young people involved commented: “If I had been given the booklet when my journey began I would have felt not so alone and that it’s not just me against the rest of the world.”

“I would have known that there are people who care and that there are other survivors who have been through what I feel and if they can do it so can I.”

“It is simple to read and I'm not one for big wordy books so I could understand and not feel intimidated by the booklet and the words. It would have helped me understand the process and that the SARC is a safe place and it's not as scary as you I imagined in the beginning.”