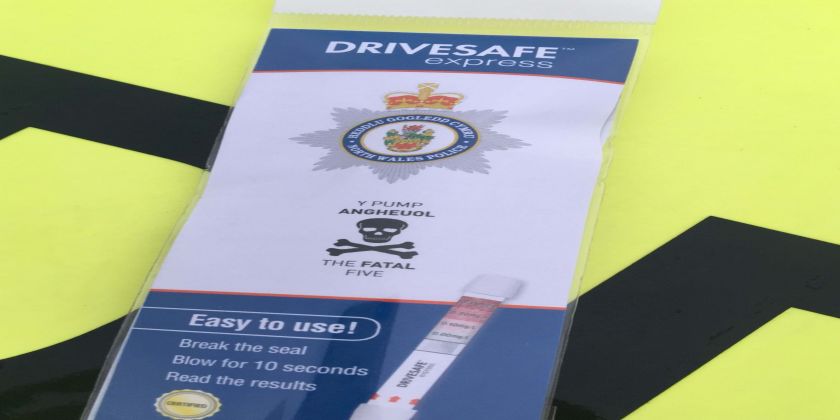 Disposable breath test kits are being distributed to hotels across the region as part of North Wales Police’s campaign to reduce the number of drink-drive related incidents this Christmas.

With the party season now upon us the force is working in partnership with a number of hotels who have agreed to distribute the ‘indication only’ kits to guests who want to check for alcohol levels the morning after a night of drinking.

Launching on December 1st, the force is preparing for their annual Christmas Anti Drink and Drug Drive Campaign where officers will be using intelligence-led tactics and local knowledge of hotspot areas to detect people who are driving whilst under the influence of alcohol or drugs over the festive period.

Temporary Chief Inspector Dave Cust of the Roads Policing Unit said: “Due to the positive feedback the force has previously received regarding these kits, we decided to take a new approach by distributing to local hotels in areas where we usually see an increase in the amount of drink drive arrests.

“We are extremely grateful to all businesses who have agreed to work in partnership with us this year. Many of the hotels we have approached are hosting special party nights so staying guests will be able to test themselves the morning after.

“We are not in any way encouraging people to drink and then breath-test themselves immediately. These kits are specifically for use the morning after as they will give an indication if any alcohol is detected in their system.”

The Drivesafe Express disposable breath test kits are a useful ‘indicator only’ device for anybody who wants to check for alcohol levels the morning after a night of drinking. They will give an indication of high alcohol levels, but won’t necessarily mean that someone is ok to drive if they are showing to be under the stated level. Any change of colour on the test indicates the presence of alcohol, meaning that a driver may still have sufficient levels of alcohol that could cause their arrest if stopped.

T/C.I Cust added: “We have previously received an overwhelming positive response to the disposable kits. Many have told us that they have helped stop them from driving the morning after when they have indicated that alcohol was still present.

“From our point of view if these kits prevent one person from taking a risk the morning after then they’ve done their job.”

Using the #ChooseWisely hashtag the month-long campaign will also feature officers from the force’s Roads Policing Unit using social media to give their own accounts of what it is like to deal with the aftermath of a collision involving a drink or drug driver.

Speaking from experience they will tell of the times when they have witnessed the devastating consequences of getting behind the wheel after drinking or taking drugs.

“Having to tell someone their loved one has been killed because a driver made the selfish decision to get behind the wheel when under the influence is the worst part of their job,” said Chief Superintendent Neill Anderson of the Operational Support Services Department.

“There are no words to describe the devastation caused by drink and drug driving and that is why we are so passionate about what we do. As the festive season gets underway we are reminding drivers of the dangers and consequences of getting behind the wheel whilst under the influence.

“Officers will be working 24 hours a day, seven days a week and anyone who is considering driving whilst under the influence of drink or drugs should know that we will be out and about waiting for them – please don’t think the rural nature of the region affords you protection because it doesn’t.”

Chief Supt Anderson added: “Our message is simple; if you are out and know you will be drinking, make sure you have plans for getting home safely without driving.

"The current drug driving legislation also makes the process of prosecuting drug drivers much simpler and our rates of prosecution are high. The consequences of being caught can be life changing.

"We are committed to tackling drink and drug driving throughout the year, not just during the Christmas period. Between January and August this year we’ve already made  630 drink drive and 638 drug drive arrests. Please help us to keep the roads safe all year round. Information from the public is crucial in tackling the issue, therefore if you know someone drives whilst under the influence, please do the right thing and report them by calling us on 101.”

A limited number of disposable breath test kits will also be available at staffed police station front counters for collection by members of the public to use at home prior to driving the morning after. To find your nearest front counter please visit (insert link).

If you suspect someone is driving whilst under the influence, please report it immediately to police on 101 (or 999 if they are posing imminent danger) or phone it through anonymously to Crimestoppers on 0800 555 111.

During the 2018 Christmas Campaign (1st December 2018 to 1st January 2019) North Wales Police administered 2,295 breath tests where 83 either provided a positive, refused or failed. 84 drug drive arrests were carried out during the same period.